‘Creativity holds the key’, said Vice President and Prime Minister of the UAE and Ruler of Dubai, His Highness Sheikh Mohammed Bin Rashid Al Maktoum, while leading the Noor Dubai Foundation’s brainstorming session, held on Monday morning at Zabeel Ladies Club, with participation of four teams from the foundation, youth volunteers from the GCC, international speakers from various universities, banks and the Carter Centre.

Ghassan Harfouche, Group CEO of MCN, was invited to be part of the brainstorming session. 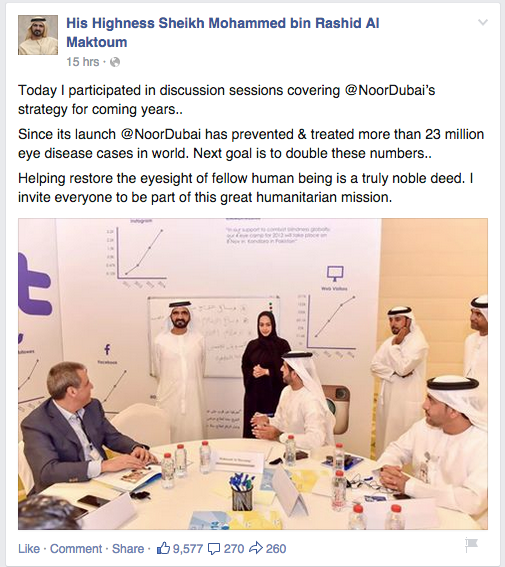 While interacting with the participants, Sheikh Mohammed spoke with them and listened to their ideas on topics of the brainstorming, which included the foundation’s national and international programmes for combating blindness, the media, the foundation’s corporate identity, as well as investments and donations for the foundation. Sheikh Mohammed took part in the debate on the most successful methods for developing the foundation’s strategy for the next five years, and capabilities to implement this strategy in the field to achieve the foundation’s objectives, among others, to tackle trachoma in the Amharic region in northern Ethiopia. Sheikh Mohammed praised the efforts of Noor Dubai Foundation and its humanitarian achievements since its inception five years ago, adding that he relies on creative ideas of youth.

He urged them to harness their capabilities and talents so as to build  a modern nation based on creativity and excellence, and creating opportunities for Emirati innovators and researchers. The Noor Dubai Foundation envisions a world where all individuals living in low income regions and suffering from visual disabilities, have access to eye healthcare and given equal and fair opportunities of treatment that will improve their quality of life.

Ghassan Harfouche is Group CEO of the Middle East Communications Network (MCN), the leading advertising and marketing communications agency in the region. Ghassan is responsible for developing and driving the vision and strategy of MCN, identifying new growth opportunities in the region and enhancing integration between the various operating companies of the group and their respective global networks (IPG McCann Worldgroup and Media Brands). MCN manages and operates 14 different advertising, media and PR agency brands in 16 cities across 14 countries in the Middle East & North Africa.

Prior to joining MCN, Ghassan was the Managing Director of the Middle East Media Services (MEMS) – a Choueiri Group company – for nine years, where he was responsible for establishing and growing the MEMS operation. Previously, he was the Deputy Executive Director at Saudi Arabian public company Tihama for Advertising and Public Relations, where he contributed to its restructuring and led its media representation network.

Earlier, Ghassan was the Trade Marketing director for De Beers – the world’s leading diamond company – covering the MENA region. Before that, Ghassan headed a company responsible for introducing, importing and distributing a portfolio of global FMCG brands to the MENA region.

Ghassan holds an Executive MBA from London Business School and a Masters Degree in Economics from St. Joseph University. He currently serves as an active member on the Dubai Council for Design and Fashion and is also a member of the board of the Mohammad Bin Rashid School of Communication. Ghassan has also served as a media economics professor at the American University in Dubai.