5 Factors to remember to help make your ad viewable

There is a lot of debate around display ad viewability. Many of the ads that brands pay for never really appear on the display screen. Advertisers are ken to shift towards paying for viewable instead of served impressions and thanks to advancements in technology and better standards in tracking we are now able to measure which digital ads are actually viewed.

The industry standard of a viewed ad is simple: A display ad is considered viewable when 50% of an ad’s pixels are in view on the screen for a minimum as defined by the of one second, Media Rating Council. Out of this we get what is called a ‘Viewability Rate’ … Percentage of ads determined viewable out of the total number of ads measured.

Here are five key factors to consider regarding ad viewability:

1. Page position is key. The most viewed ads are right above the fold – not on top of page. 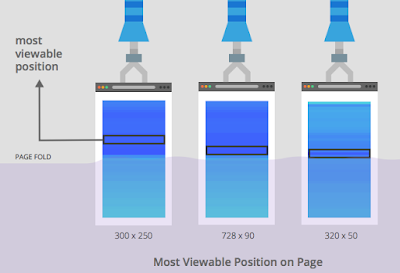 This goes against what most marketers believe. Age old wisdom (actually, how old is age old in the interweb?) suggests that the horizontal banner on top of the page is the win-win. Well, not according to studies from Google. Ads that appear just about above the fold are the winners.
2. Ad size does matter! Google reminds us that the most viewable ad sizes are vertical units. Not a surprise, since they stay on screen longer as users move around a page. The highest scoring ad size is the 120×240 format placed just around above the fold. Other good sizes are the 240×400, the 160×600 and the 120×600 (width first in all size references). All of them score above 50%. 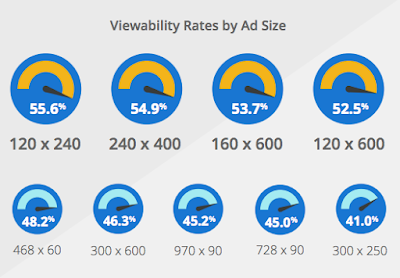 3. Above the fold does NOT guarantee viewability. Surprised? While average viewability rates are better when ads are above the fold, but page position isn’t always the best indicator of viewability. Not all above-the-fold impressions are viewable, while many below-the-fold impressions are. Around 68% of above the fold ads are viewed. And around 40% of ads below the fold are viewed.
4. Viewability rates vary with industry or content verticals. While it ranges across content verticals, or industries, content that holds a user’s attention has the highest viewability. So this takes us back to the importance of both content and context. 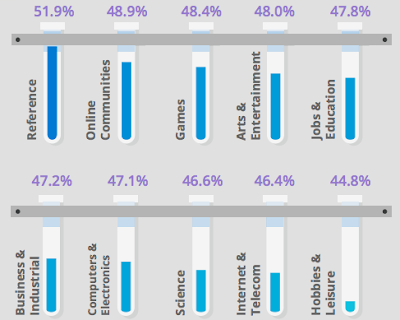 Online reference and communities fare the best while internet and telecom and hobbies and leisure driven verticals are at the bottom of the chart. Here again, it is important to remember pull vs push content and context. If I am looking for something and you are showing me an ad in that context with relevant content, you score higher.
5. The publisher is important. A small number of publishers are serving most of the non-viewable impressions; 56.1% of all impressions are not seen, but the average publisher viewability is 50.2%. When planning your media distribution, it’s probably best to ask for the publishers viewability standards and their average rates.
Note: All intelligence in this article is from Google data.
Tom Roychoudhury, CIO, MCN
first published on a blog post
By admin|2017-05-02T08:35:24+04:00June 10th, 2015|Blog, Uncategorized|